Gabriel Tupinambá:
I want to introduce a slightly different perspective [than Žižek about “going to the end”], and I was happy to see that I think Ciara is pointing to a similar direction when she says “Zizek should probably shut up about some things” [1] which is the issue of when going to the end is actually a way to cover something up, right?

I have in mind here an anecdote that I always loved about this Brazilian kindergarten teacher and she was well-known for her students being really good at drawing, and nobody knew what her pedagogical method was for this and why did the students get so good at these drawings and everyone’s children were really crappy.

They asked her and she said that she was just paying attention to them while they were drawing and she knew when to pick the paper out of their hand, before they would scribble over the drawings and make them uncomprehensible again.

I posted this question:
Gabriel Tupinambá, who are you to tell Slavoj Žižek when to speak and when to shut up? What arrogance is this? What great secret are you “supposed to know” so that you dare to treat Slavoj Žižek like a child who is scribbling stuff on paper?

Daniel tactically ignored my question but Gabriel couldn’t hold himself back. 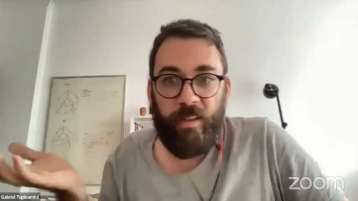 Gabriel Tupinambá:
Can I just answer I mean there is a question here: “Gabriel, who are you to tell Slavoj Žižek when to speak and when to shut up?”

Gabriel Tupinambá:
Let me just say something which is… The problem again with the idea of taking the drawing out is that, when you continue to say words after that, you are not really speaking, it’s not a matter of asking anyone to stop speaking.

So I wouldn’t dare to say who should speak or shut up, but I think I can tell apart when they are saying things that are just speeding in the void, right?

full speech is never to be conceived of as a simple and immediate filling-out of the void which characterizes the empty speech (as in the usual opposition of “authentic” and “nonauthentic” speech). Quite the contrary, one must say that it is only empty speech by way of its very emptiness (of its distance toward the enunciated content which is posited in it as totally indifferent) which creates the space for “full speech,” for speech in which the subject can articulate his or her position of enunciation. (Tarrying With The Negative)

In Turkish, we say: Feed the crow and it will pluck your eye.

The Bible says: Do not give dogs what is sacred; do not throw your pearls to pigs. If you do, they may trample them under their feet, and turn and tear you to pieces

For the full quotation, see “There is a meta non-language”

[1] Ciara Cremin was the irrelevant speaker who complained about transphobia before Gabriel Tupinambá.

Unfortunately, I do agree with the critique. I was totally off the mark with the tone of my intervention and I already emailed Slavoj apologizing. This has nothing to do with theory or my wish to show support to Ciara – it was a personal blunder of mine.

The Ironic Curtain between Aries (Arise) and Scorpio (Superego): The unclean syringe

Nevermind: Let it go and Let it be

Getting Rid: Gaze displeased by the excrement, Breast shaming the gaze, Voice naming the breast

Pat Ron to chase the Dementors away: