The intellectual operation of the Žižek-Event is summarized in the following three metaphors: 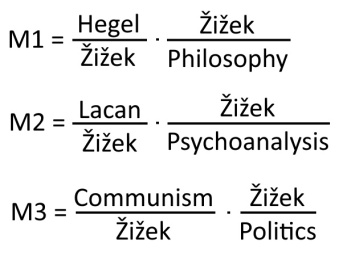 M1, M2 and M3 express Žižek’s engagements in the order of precedence: He is first and foremost a Hegelian philosopher, he is also secondarily engaged in Lacanian psychoanalysis and tertiarily engaged in communist politics. What he holds as a result is not identifiable as a particular intellectual position. Instead, his name gathers a universally significant singular evental situation that links all three worlds together while self-cancelling the particularity of its position.

Each metaphor has two terms. In the first terms, Žižek supports his three causes as a “card-carrying” (see Žižek! documentary) Hegelian, Lacanian and Communist. These are his “symbolic engagements” supported by logical argumentation that publicly defends their respective causes as particular Names-of-the-Father [1].

But the second terms are more interesting: In order to ground and substantiate his symbolic engagements, Žižek continues to partially reinvent aspects of philosophy, psychoanalysis and politics by gathering metonymical material that is entirely Žižekian. These “real engagements” go to the ground (zugrundegehen) and confirm that “substance is subject”. That’s why each of the second terms carries an independent Žižekian significance and value.

Since Žižek “moves the infernal regions” [2] by carrying out his intellectual operation at the level of metonymy, below the usual level of metaphor, this operation has a peculiar self-cancelling [3] quality that is perceived as breaking the conventional rules of authorization. This is the reason behind:

I have a term for Žižek’s peculiar strategy of “moving the infernal regions”: I call it “real authorization” or self-authorization and oppose it to the conventional “symbolic authorization” [5].

Žižek was right when he diagnosed the intellectual world as suffering from melancholy:

With regard to mourning and melancholy, the predominant doxa is as follows: Freud opposed ‘normal’ mourning (the successful acceptance of loss) to ‘pathological’ melancholy (where the subject persists in his or her narcissistic identification with the lost object). Against Freud, one should assert the conceptual and ethical primacy of melancholy: in the process of loss, there is always a remainder which cannot be integrated through the work of mourning, and the ultimate fidelity is fidelity to this remainder. Mourning is a kind of betrayal, the ‘second killing’ of the (lost) object, while the melancholic subject remains faithful to the lost object, refusing to renounce his or her attachment to it. (Did Somebody Say Totalitarianism?)

This is the nostalgic “symbolic mourning” that supports the usual “symbolic authorization”. “Real authorization” is supported by another kind of mourning that I call “real mourning” [6]. In contrast to the famous “another jouissance than phallic jouissance” that neither exists nor subsists [7], “another mourning than nostalgic mourning” does indeed exist and function, which is surprising! I think Žižek managed to “move the infernal regions” by mobilizing this real mourning because “Gods above didn’t budge”.

[4] For example, Eliran Bar-El at first seemed to be defending Žižek as a supposedly “sacrificial intellectual” against Žižek-bashers and then he came out as a Žižek-basher himself when he officially declared in an “academic” paper that Žižek can only be a non-authoritative anti-intellectual fool.

[6] See “Lacanian struck-turalism and the desire of withdrawal”

The Complex Plane of Symptom

The combinatorial ground of spatiality