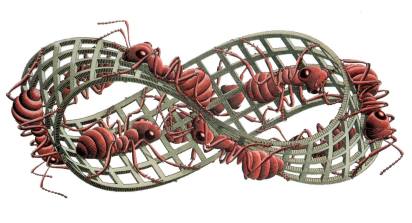 In Lacan’s vocabulary and conceptual grammar, the idea that best captures (and the portal through which we can understand) the materialist notion of “external reality” is lodged in this phrase: “a zero point” (un point zéro). With a dialectical twist, however, this point is approached only via this seemingly un-materialist conceptual invention of all: the “other object” (objet autre, objet a). There are, therefore, three terms we need to pay close attention to when trying to grasp the uniqueness and significance of Lacan’s materialism: the “zero point”, the “other object”, and the relation of these two to what is given form when he refers to an “external reality”.

In his latest major philosophical work, Sex and the Failed Absolute (2019) [SatFA], Žižek had underlined the link between “external reality” and this little bit of a “thing” called the “other object” (objet a) in this condensed line: “external reality itself has to be sutured by an element which holds in it the place of the symbolic process (objet a)” (1). Without elaborating too much on this, my aim here is to draw focus on how “external reality” is posited here as something that needs “suturing”, and objet a is what does this “stitching” work. In Žižek’s latest philosophical works, the discussion on “external reality” is handled explicitly in two works, in Less Than Nothing [LTN] and in SatFA. The formulaic line (‘external reality has to be sutured by objet a’), however, only appears in SatFA and not in LTN or in his other major works. But where is the third term of Lacan’s materialist triad? While Žižek has also been using the phrase “zero-point” in his works, his conceptualization of it is variable and he has been using it in a quite a “common-sensical” manner (2).

This is why we need to closely re-read Lacan. What is the status of Lacan’s point zéro and how is this linked to objet a and the idea of a materialist “external reality”? Although point zéro first occurs in Lacan’s work as early as 1955, it’s rigorous conceptualization—tying it to objet a as part of a two-sided idea—can be found years later in his 1963 lectures in the Seminar entitled “Anxiety” (3). Serendipitously, 1963 is also the year when M. C. Escher produced his work entitled, “Möbius Strip II (Red Ants)”, which was used on the book cover of the “Anxiety” Seminar when it was finally published in 2004 (4). 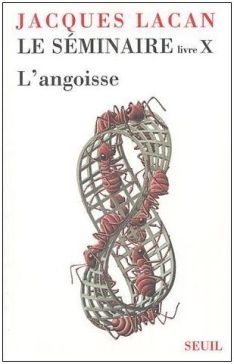 “Space is not an idea”

Lacan’s discussion on the materialist core of these linked-concepts—objet a and point zéro—is explicitly underlined in this statement: “Space is not an idea. It bears a certain relation, not to the mind, but to the eye” (5). Twice in the lectures, he emphasized that this point should not be understood “in the idealist manner”.

This is the thesis that needs to be unpacked step-by-step so as to grasp how Lacan ties objet a to point zéro and, in the process, construct a way of formulating a materialism of real space. The “eye” he refers to here is not metaphorical but the actual human visual apparatus that “organizes the world into space” because, as he emphasized, “the eye is already a mirror”. What we are dealing with here is the realm of visuo-spatial reality “from which we are best able to see … the lure of desire”. At the heart of this “lure of desire”, of course, is this “object” that Lacan refers to when he said that “what is most me lies on the outside”, the objet a.

Arriving now here at Lacan’s objet a (usually called the “object-cause of desire”), the next step is to see how to conceive the necessary spatial dimension of this psychoanalytic mechanism for generating fantasies. The conceptualization of space that Lacan forwards here is not the common-sense feature of “extensionality” (as found, for example, in his friend and contemporary Claude Levi-Strauss). What Lacan is forwarding instead is this idea of an irreducible, undivided, inelusive “stain” or “spot” in space.

The objet a and the point zéro

Is this “stain” in space the objet a itself? The answer is no. What Lacan is driving at here is this: there is something else lurking in objet a as it plays itself in space. This something else is the point zéro (or in its longer phrasing by Lacan, the “zero point between the two eyes”). This point zéro is described as “spread[ing] over the entire field of vision” and is linked (“correlative”) to the objet a.

What is the nature of this link? The key is to catch the distinction between the two: in Lacan’s words, they “coincide” but “do not merge”. The two have sharply contrasting characteristics. The point zéro is the proper name given to this entity described above as the undivided and inelusive “stain” in space. In contrast to that, the objet a is described as divided and elusive: it is always ‘somewhere other than where it is functioning’ (“somewhere other than where it sustains desire”). The two points, therefore, are markedly distinguished.

Here is a tabulation of the other distinctions and aspects of the two “points” (terms in parentheses are derived as inverse of Lacan’s descriptive terms for the “point” in the column): 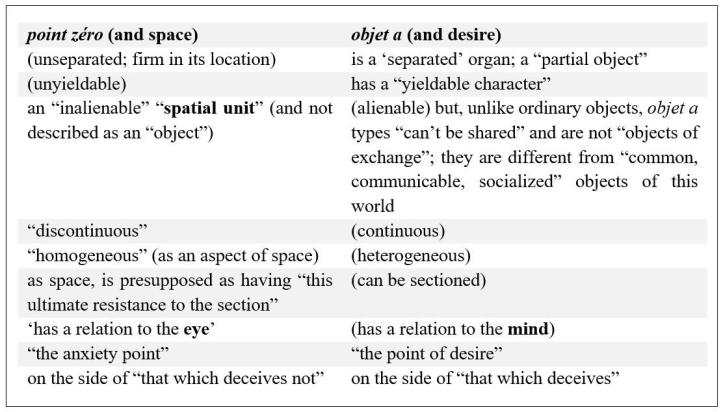 In the “dialectic of our perception of the world”, the objet a is called by Lacan as “the point of desire”; the point zéro is called “the anxiety point”: “the sole locus of disquiet that remains in our relation to the [spatial] world”.

So how are the two “points” linked?

Having said that, how do these two “points” (point zéro and objet a) (as they coincide) relate to each other? The objet a (as a function or mechanism) is what makes possible for the point zéro to appear as “stain”, “cut”, and “twist”. The objet a is what makes possible for the “zero point” to appear “at the level of the visual field” and to produce effects (desires, fantasies, and also anxieties). The anti-idealist bent is, following Lacan, to be noted carefully by saying to appear and not to be constructed. Space itself, in this view, is really marked by stain-like twists, cuts and breaking points. The point zéro (of the visuo-spatial level) gives material support to objet a for it to generate space-related fantasies.

How did Lacan arrive at this idea of a point zéro?

The derivation of this point zéro is given very tersely in Lacan’s lectures. The phenomenologically-palpable elusiveness of desire’s objet a is, with the simplicity of a structuralist, turned by Lacan as the logical basis for positing its counter-point: the need to posit an inelusive entity.

But there is also another route—one which we can perhaps call as practice-based reasoning—by which Lacan arrived at the idea. Here is the way he puts his observation: “Think of the way in which, on the blackboard, the physicist makes mention of the function of a body in space. A body is anything and nothing—it’s a point. But it’s all the same something that is localized in space by something foreign to the dimensions of space …” For Lacan, the everyday practice of spatial plotting (“on the blackboard”) of any given material entity (“a body in space”) shows that there is already a positing of a “point” that “localizes” this body or entity in space—but that this “point” is not reducible (it is “something foreign”) to the “dimensions of space”. This (reduction-resisting) “point” is what Lacan has formalized by naming it as the point zéro. This notion of a spatial point zéro aligns it fully with the axiomatic of negation, the philosophical tradition that Lacan is locating himself intellectually from the very beginning.

Lacan’s unique approach to the materialism and realism of “space” is worth emphasizing: the “materiality” of a phenomenon (in this case, space) is seen not by identifying some stable “stuff” or “properties” but by marking its point of cuts (discontinuities, gaps, twists and breaks), which also signal or point towards the cuts/gaps of desires and in our pursuit of those desires. This approach to materiality is taken not so much to deny a priori the idea of a stable “stuff” or matter (a stable “thing” that fascinates positivist science) but more to give thematic importance to the “undialecticizable” points of tensions (unsublatable twistings and breakings)—or negativities (not positive “stuffs”)—in entities and categories we are dealing with: either in space or in our libidinal life.

What Lacan brings to view, with the point zéro, is an “external reality” that is solidly spatial and a materialism that is focussed on the cut (or cuts) in space. While the mainstream notion of space simply accepts the common-sense, Euclidean/Cartesian view emphasizing “the field of extension” as its key feature, the Lacanian approach, without actively negating extensionality, underlines topological “twisting” and “breaking points” as the more important and elemental features to look at—and to look for—if one is to take the position of effective, working materialism.

Hal Odetta is a pen name. He is an anthropologist who teaches at the University of the Philippines and works with the Manobo indigenous peoples of Mindanao.

(1) This is the full quotation from SatFA (p. 240, emphasis added): “The element which holds together the two levels, “suturing” each of them, functions as their quilting point, and the repetition (of the Möbius strip) that characterizes the cross-cap takes the form of an inversion in the way suture functions: the “inside” (the space of the signifier) has to be sutured by an additional element which holds within the signifying order the place of what is excluded from it (like the well-known paradox of the list of all species of dogs which also includes “dogs not included in this species”), and external reality itself has to be sutured by an element which holds in it the place of the symbolic process (objet a).”

For this important quotation from SatFA, a concise and well-structured discussion (on the relation between the field of “signifiers” and the field of “external reality”)—and its expansion into another key Lacanian concept (“suture”)—is given in these two previous blog-posts by IBF: “Mirror Stage and Social Media: Authorization and Embodiment” and “The Separation of Authorization (Symbolic Suture) from Embodiment (Real Suture)”. A careful reading of these blog-posts can save one a lot of time reading through much longer Žižekian texts dealing with the same thematic-set (external reality/signifiers/suture).