As Zlatan once said, Zlatan’s the man: A Žižekian analysis of Zlatan Ibrahimovic — Julian Paul Merrill 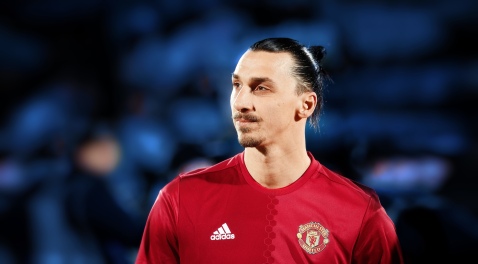 Zlatan Ibrahimovic scored his 500th career goal in a spectacular fashion this month. While running in the box, he received a lob pass and did a 360° roundhouse spin-kick, thereby hammering the ball into the net. It was a classic Zlatan goal, a stroke of football magic of the kind only he seems capable of. Ibrahimovic made sure no one missed this: “The last goal cannot happen again. Only I can score a goal like that.”1

This, too, is classic Zlatan. There may be a few players in the world (Messi and Ronaldo) that are considered better overall players, but when it comes to larger-than-life charisma on and off the pitch, no football personality is bigger than Zlatan’s.

After Ibrahimovic signed for L.A. Galaxy this year, he took out a full-page ad in the L.A. Times that simply read: Dear Los Angeles, you’re welcome.2 When asked on Jimmy Kimmel Live whether he thought he could have excelled at other sports, he said: “whatever I would do, I would be the one I am today (…) I apologize to the fans who are cheering for other sports, because it would be the same thing.”3

In comment sections all over the internet, numerous Chuck Norris-style jokes of the following sort can be found: “When Zlatan turned 18, his parents left the house.”4

It is tempting to think of Ibrahimovic’s posturing as just an act, and in a way, it is. Clearly, Ibrahimovic is playing the part of the hyper-masculine, self-aggrandizing, alpha male. In fact, Ibrahimovic is usually the first to let you know it’s all just fun. He always manages a cheeky grin towards the end of his clearly over-the-top jokes, thereby distancing himself from his own public persona. This is a case of fetishistic disavowal. Ibrahimovic effectively says, “I know very well that I shouldn’t behave like an arrogant peacock, but still … I’m pretty amazing, don’t you think? “Grin”

In doing so, Zlatan makes himself enjoyable to watch because he has already relieved us of the guilt normally associated with the unfiltered idolization of a dominant alpha-male. In a time when terms like “toxic masculinity”, and “mansplaining” have entered the popular culture, this is no small feat, but one Zlatan effectively and repeatedly pulls off. Perhaps Ibrahimovic’s popularity is in some part due to a Freudian return of the repressed. From a Platonic point of view, what shines through Ibrahimovic’s Persona is the absolute of the dominant alpha-male.

Here, a paradox lies. Ibrahimovic may play a “no apologies” alpha-male for the cameras, but by distancing himself from himself he is effectively “apologizing” for this very persona. Here, the form and content of Ibrahimovic’s character are in apparent contradiction: alpha males don’t regularly distance themselves from themselves.

By distancing himself from himself, Zlatan makes the content of his persona not only enjoyable for his fans; he may be making himself bearable for himself as well.

As Žižek states: “wearing a mask can be a strange thing: sometimes, more often than we tend to believe, there is more truth in the mask than in what we assume to be our “real self.”6

Perhaps there is more truth in Ibrahimovic’s mask than he himself would like to believe.

In popular culture, it is often considered laudable when celebrities stay “real” and “true to their roots”. Often enough, Zlatan reminds his fans of his down to earth upbringing in Rosengard, Sweden’s poorest suburb. In many ways, this is entirely in accord with his tough-guy image: coming from a rough neighborhood gives him street credibility. But by showing his connection to his past, Zlatan also creates a distance to his larger-than-life public persona, thereby displaying the very sense of modesty he seems to lack. (It would be more in character if Ibrahimovic were to claim he had been born on another planet.)

This seems to be yet another crack in Ibrahimovic’s public persona, another distancing from himself.

All of this seems to make the following question inevitable: Who is the “true” Zlatan Ibrahimovic?

But perhaps this is the wrong question. Following Žižek, a better question could be: What if there is more truth in Ibrahimovic’s public persona than in whatever lies behind the mask?

Žižek states: “All the magic, all the invisible mystical spirit, is in the mask as such – therein consists the basic feature of the symbolic order: there is more truth in the mask, in the symbolic form, than in what is hidden beneath it, than in its bearer. If we “tear away the mask” we will not encounter the hidden truth; on the contrary, we will lose the invisible truth which dwells in the mask.”7

Žižek speaks of the “magic” in the mask, and indeed, when watching Zlatan’s most spectacular goals, the word magician does come to mind.8 In football, you don’t get extra points for scoring a particularly incredible goal. Nevertheless, it is undeniable that Ibrahimovic has a knack for doing just that.

But how, precisely, does he do it?

On one level, Ibrahimovic’s performance on the pitch can be explained with his physique: he is six foot five; he has incredible ball control for a man his size. He is also exceptionally strong and has great vision; it is no one wonder he excels at football.

And yet, physical attributes alone cannot explain the cultural phenomenon that is Zlatan Ibrahimovic.

The real enigma is: How did his superhuman public persona come to be? Or perhaps, posed another way: how did Zlatan get his mask?

In one sense, it seems conceivable that, because Ibrahimovic was so talented, it enabled him to adopt this public persona. He played well, so he started bragging about his skills, and the bragging just stuck.

However, one could contend that there are lots of talented footballers in the world, but only one whose name is used in Chuck Norris jokes. Why Ibrahimovic?

Ibrahimovic and his teammates all seem to accept that he is the dominant player on his team and that he is capable of scoring goals from every angle – in this way, they all act in accordance with the mask. This in turn gives Ibrahimovic the very confidence and chutzpah to attempt superhuman things on the pitch. As a result, every time he really does succeed in doing something fantastic, the belief in the mask is reinforced.

As Lacan said in his enigmatic way, truth has the structure of fiction. In the case of Zlatan Ibrahimovic, his “symbolic mask” seems capable of positing a reality that mirrors the “truth” of the fictional mask to an uncanny extent. Seeing this, one is tempted to say that Zlatan Ibrahimovic really does possess superhuman powers. A realist would cynically state that this is not possible, but that would be missing the point. In reference to Lacan’s famous statement: “Les non-dupes errent”, Žižek states: “Those who do not let themselves be caught in the symbolic deception/fiction and continue to believe their eyes are the ones who err most.”9

Ibrahimovic is currently the third most decorated active footballer in the world, only Dani Alves and Andres Iniesta have won more trophies in their career.10 As Ibrahimovic’s many opponents over the years can surely attest to: underestimating Zlatan is not a wise thing to do.

Julian Paul Merrill is a medical doctor living in Berlin. He is in training to become a child and youth psychiatrist. His short stories have been published in numerous publications.