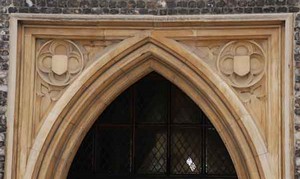 In the series foreword of his 2006 book ‘The Parallax View’1, Slavoj Žižek aptly describes the true potentiality of a short circuit as “a faulty connection in the network – faulty of course from the standpoint of the network’s smooth functioning. Is not the shock of short-circuiting, therefore, one of the best metaphors for a critical thinking? Is not one of the most effective critical procedures to cross wires that do no not usually touch…” As one can imagine from the title of this essay, which at first seems to be a shameful paraphrase or, hopefully, later on, a reformulation (depending on which side is being looked at, the right or the left) of the classic Leninist text, The State and Revolution, such a short circuit is attempted here quite consciously and unabashedly. One should notice that the replacement of the word ‘State’ to that of ‘Spandrels’ does not actually change the structure of the sentence. Lenin emphasized their interconnection, (or more accurately: intra-connection) and so will I.

But first of all, what are Spandrels? ‘Spandrels’ is an architectural term defining the space between two arches or an arch and a rectangular enclosure. Spandrels, in other words, are the accidental side-effects of an architectural decision whose true aim was to build the arches and not the space between them. It is not fortuitous then that the same word was also castoff by biologist Stephen Jay Gould, in his infamous text “The Spandrels of San Marco and the Panglossian Paradigm”2 in which the Spandrels of the Church of San Marco are used to prove a very significant point: that together with biological adaptation there is also exaptation. Exaptation is a term that designates a shift in the function of a trait during evolution. For instance, a classic example of exaptation is the feathering of a bird. Although they may have originally been evolved for temperature regulation, in the end they served an additional function, that of flight. As Gould states if “adaptations have functions … exaptation has effects”3 What is meant here is that, precisely, the additional function or trait added in, is not planned but comes totally unexpected, as if from nowhere, to challenge the whole system’s structural foundation and thus, retroactively, changes it.

Exaptation (as a retroactive procedure), and its spatial architectural equivalent, Spandrel, can therefore assume the qualities of a Straussian floating signifier and adapt to anything we attribute to it. To offer an example, other topoi of exaptation might very well come from literature. Is it not that Kafka’s fictional creature Odradek’s places of adobe (garret, the stairway, the lobbies, the entrance hall) are exactly those that one would find no difficulty in characterizing as ‘exaptive’ par-excellence? And, to take it even further isn’t the description of the creature itself a perfect example of a whole series of rapid exaptation(s) without adaptation? In other words, isn’t the creature repetitively revolutionizing itself so that the old does not have any time to develop, and the new is already old due to its relentless repetition? Another famous example from Kafka is ‘The Metamorphosis’ in which Gregor Samsa, being transformed into a giant cockroach, manages finally to feel at home under the couch.4 Empirically speaking, do the interstices between the floor and the couch or bed, not always have something menacing about them, a quality that can hardly be put down in words, so that whatever happens down there should be ignored and forgotten?

Wasn’t Julia Kristeva5 right when she emphasized the abhorring merits of the semiotic whose role is always disruptive, and the symbolic as the normalizing agent of the previous interruption? It appears that Maurice Blanchot was accurate in describing the revolutionary potentiality of the very word “Interruption” (chapter 8, Interruption: As on a Riemann Surface in The Infinite Conversation6) where he states unambiguously that,

The fact that speech needs to pass from one interlocutor to another in order to be confirmed, contradicted, or developed shows the necessity of interruption. The power of speaking interrupts itself, and this interruption appears to be minor … but nonetheless, is so enigmatic that it can be interpreted as bearing the very enigma of language.7

The paradoxical nature of the above quotation is that the power of interruption does not come from the outside as an exoteric factor but is embedded in the very failure of the ongoing procedure. One cannot talk indefinitely, one has to make a pause, disrupt the pattern, start again, and that is exactly how meaning is produced. Even if one tries to talk forever, as in Samuel Beckett’s ‘Not I8,’ the very fabric of language becomes meaningless and the need for an interruption almost obligatory. Nevertheless, what role does the mouth play in the interruption of language in Beckett’s ‘Not I’? Aren’t both undeniably connected, the one engendering the other? Could there be a different reading? The mouth, (and especially the rounded, meaty lips) as an ‘exaptive’ apparatus, acquires – in the Barthesian sence – an ‘obtuse’ meaning in which language as such is transformed into pun and buffoonery. Accordingly if, by analogy, language (as meaning) constitutes the initial architectural decision of building the arches in the first place, the space that occurs between them (spandrels) are the throbbing, spitting, meaty lips that undermine language from within, making it appear less and less meaningful, until what is left is an undistinguishable, disturbing murmur. This isn’t the Heideggerian perversion of the ‘torture house of language’, it is language itself that is being tortured and ridiculed by the ‘exaptive’ apparatus that are the lips.

So, what about politics? A secret fantasy of many people nowadays is to catch politicians off-guard, derailed from their usual routine of ready-made speeches, succumbing in serious Freudian slips that weaken their position of utterance and show them as they really are: corrupted, power driven vampires. But of course things are never that simple in our post-modern era, where even serious political mistakes can be presented as merely spontaneous attentions of a humane individual that break through or interrupt his/her tough, cold political persona. In this quite formal sense this not ‘exaptive’ but adaptive.

True exaptation can only be found, not at the level of the individual, but on the level of universality/singularity. Let us return to our architectural example: if the spaces created between the arches are an essential by-product of the design itself then what can be done with them? How should an architect deal with these spaces? Well, the initial step is for him/her to recognize their existence. At first this recognition will be that of disdain for what has occurred without permission or design. After that, he will have to handle the situation for the space between the arches starts to defy the arches themselves. Therefore, he/she will try to fill it in with content (similar to that of the arches) as to appease its power of interruption. The final step will be that of amazement coupled with fear since the previous defense mechanism backlashes and starts to work on its own. The content-filled Spandrels manage to become more attractive and imposing that the arches themselves could ever be. (on the spandrels of San Marco there exist the depictions of the four evangelists including the one the church got its name from. If this doesn’t illustrate the power of the spandrel then what does!) Isn’t this example totally relevant to the Hegelian notion of ‘negation of negation’? First there is the positive element (the construction of the arches according to design), then when the first negation occurs (spandrels) the system is in a state of antagonism until finally a secondary negation restores the space between the arches at the level of universality/singularity. The singular/universal (in the Sartrean sense) nature of Spandrels is precisely the fact that they are simultaneously the (by) product of a decision and the attractor (in the mathematical sense) that retroactively changes the original decision itself.

What is more, isn’t the above example wholly applicable to Alain Badiou’s notional terms of Situation, Structure of a Situation, State of a Situation, Evental site and Event proper?9 The two initial terms is what the architect thought of at the inception of his/her architectural design. They are the blueprints of knowledge (savoir) and not of truth (verite), with which the architect organizes and vindicates his/her architectural decision. The state of a situation is a meta-structuring or re-presentation of a situation since the space between the arches (as parts over elements in set theory) begins to function as an excessive component or as Peter Hallward accurately states on his book on Badiou,

Since it cannot be ordered in any obvious way, the excess of parts over elements is properly anarchic and immediately dangerous. It risks, so to speak, the introduction of an elementary disorder. Moreover, in the midst of this disorder there is nothing to ensure that the foundational void of the situation – that is, that unstructurable “something” that haunts the situation, from beyond its unpresentable horizon, as an indication of the very substance of its being – might not somehow erupt into the situation itself, precisely as something uncountable, anarchic, threatening. The classic historical emblem of such eruption is an uprising of the masses.10

This re-presentation is exactly our agony-filled architect desperately trying to cope with the nightmarish intrusion of Spandrels, as a by-product, in his/her initial design.

Consequently, how can we incorporate the last two Badiouian notions in our example? The title of this essay would be a good start. Isn’t what we have been calling so far the space within and without, the Lacanian ‘extimate’ space (Spandrels), the impeccable model of an evental site into which revolution as an event proper can follow? Although, according to Peter Hallward, an evental site has its place in a situation but belongs to it “as something uncertain … if not sinister and threatening”11, revolution, as the truth of the situation, names this void. The naming of the void is, again, singular and universal. The proletariat is, at the same time, the agent and subject (in the Badiouian sense) of this naming (singular), and the place of inscription that sets the whole procedure running in the first place (universality). In architecture such a naming could very well be the appropriation of the word ‘Spandrels’. That would be, as Slavoj Žižek calls it, ‘architecture’s great politico-ethical responsibility’.12

Doros Georgiou is an English teacher, translator and researcher from Cyprus.

6. Blanchot, Maurice, “Interruption: As on a Riemann Surface” in The Infinite Conversation (Minnesota: University of Minnesota Press, 2008).

9. I rely here on Peter Hallward’s analysis in “Badiou’s Ontology” and “Subject and Event” in: Hallward, Peter, Badiou: A subject to Truth ( Minnesota: University of Minnesota Press, 2003), p. 81-122.